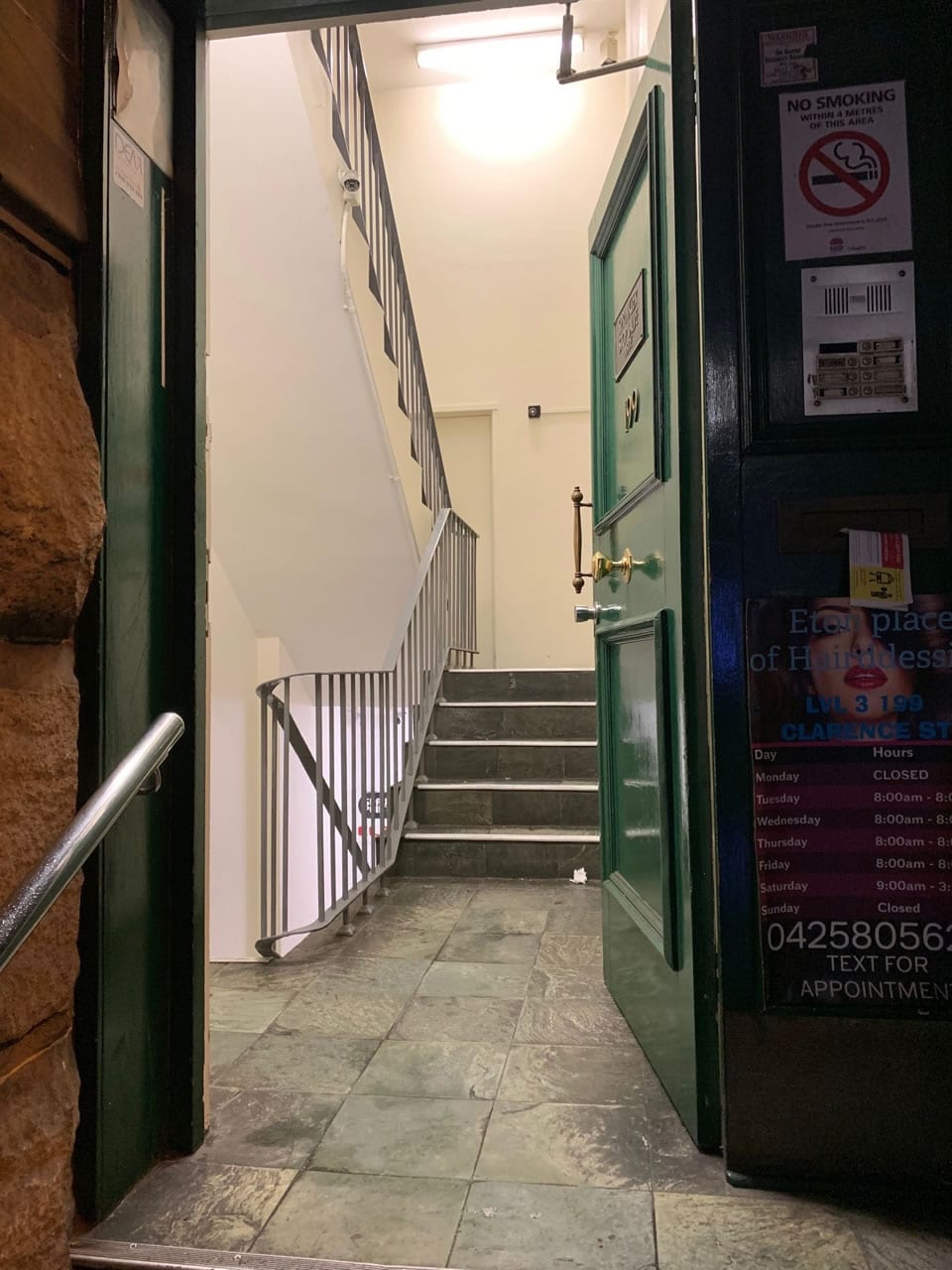 Under the guitar sign, in the basement. The mounted moose head above the stairs is a great intro to this eclectic bar. With mixed furniture, washed out brick walls, tropical wallpaper, and a wide variety of framed pictures add personality to the small bar.  Grandma’s Bar has a full range of spirits, both premium and not. There isn’t a large range of Aussie gins though, but enough. 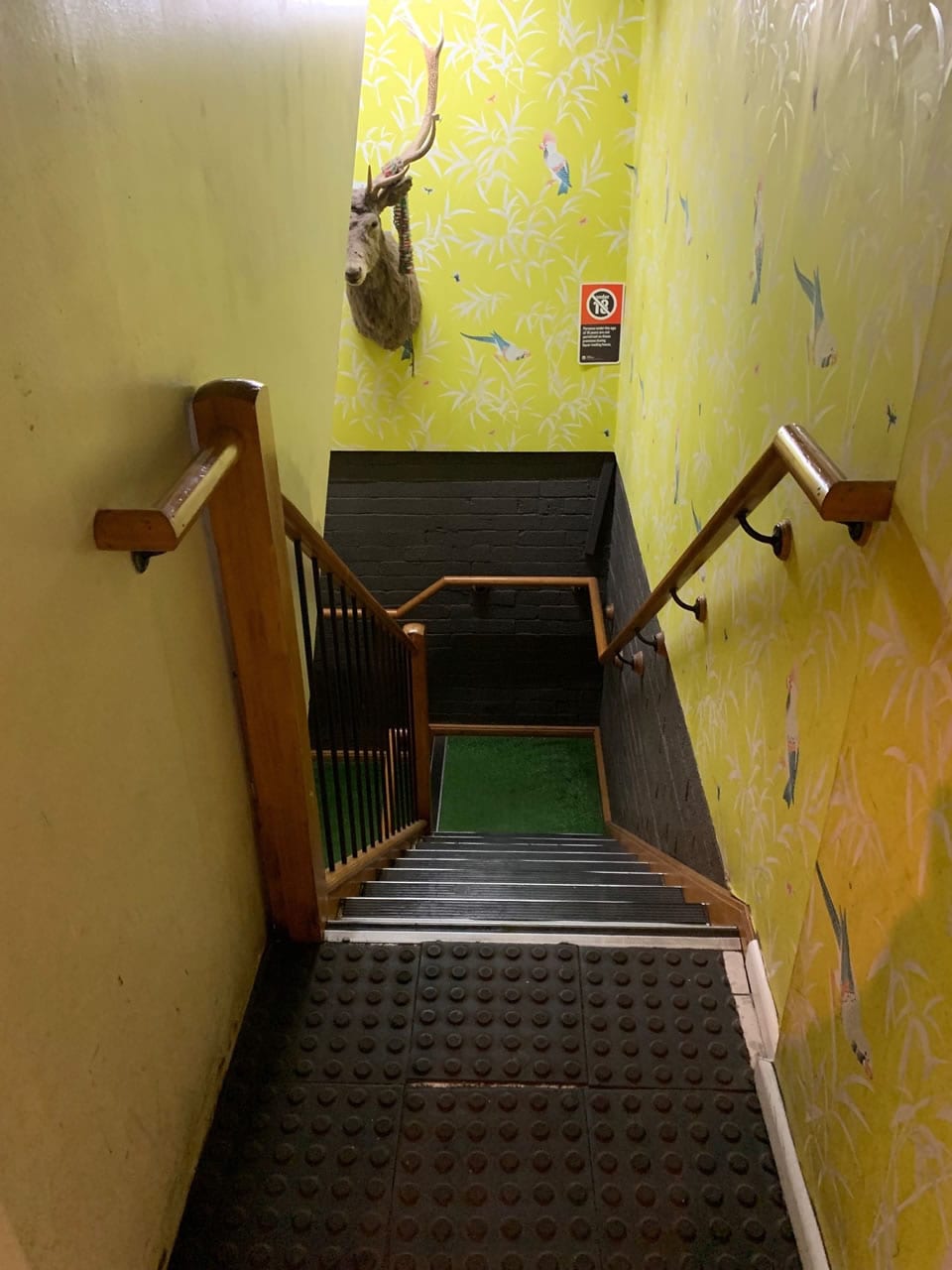 As I was making my way to another bar, I stumbled upon this curious place down a small alleyway. Fantastic minimalist decor. Dylan tried to give me a crash course in mezcal, serving me a Don Valente Angel, smoother botanical type for a gin drinker he prescribed. I found that they are classified by:

the maker: Pedro or Jose or Eduardo et al
the harvest: type of agave
the cook: eg roasted in pits
the crush: eg shredder
the ferment: eg wood tanks
the still: eg twice in a copper still.

Interesting window into another world. A little tough on my palette. Maybe I’m just not ready for it though – back to gin hunting. 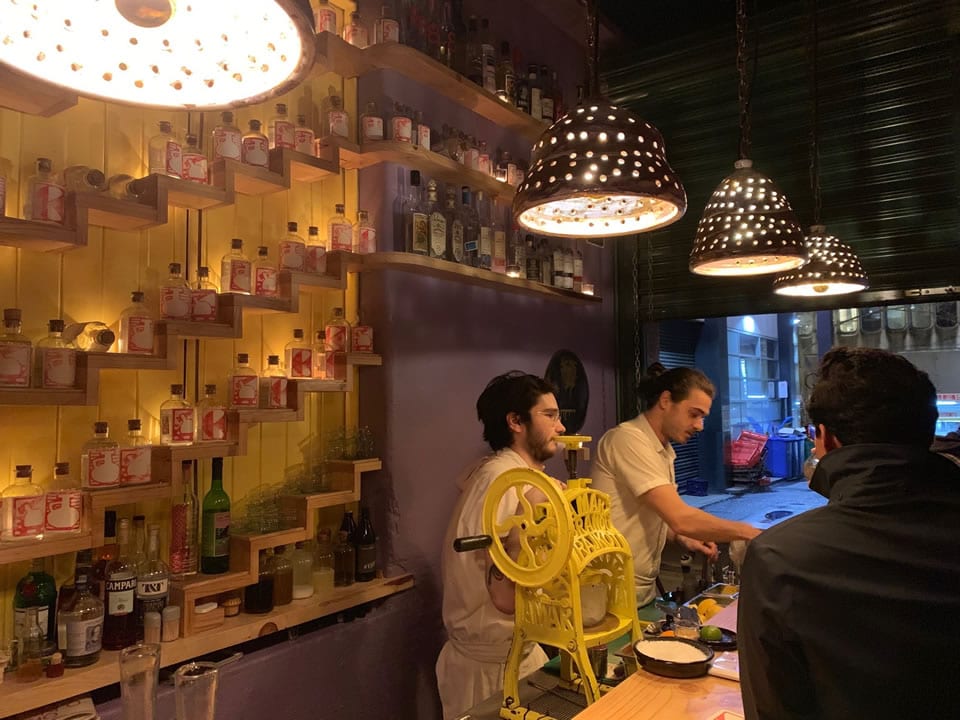 I nearly missed the dark, half-alley entry to this hidden gem. At first sight, you might guess this one is all about rum, and you would be right. So not to miss the embryonic rum culture in Australia, I wandered down and was convinced to try their best, starting with an HSE, a Rhum Agricole from Martinique, aged in Sauternes casks.

Afterwards, I went more local with Husk Pure Cane, Agricole which is fermented sugar cane juice full of green earthy character, and then Husk Spiced Bam Bam….great stuff from the makers of Ink Gin!
I had already bought a bottle of Husk 5yo Agricole Rhum several weeks earlier, which I think was much better than the HSE.  It was only a very limited release, so they didn’t have any…but luckily, I did 🙂

…anyway, moving back to gin hunting! 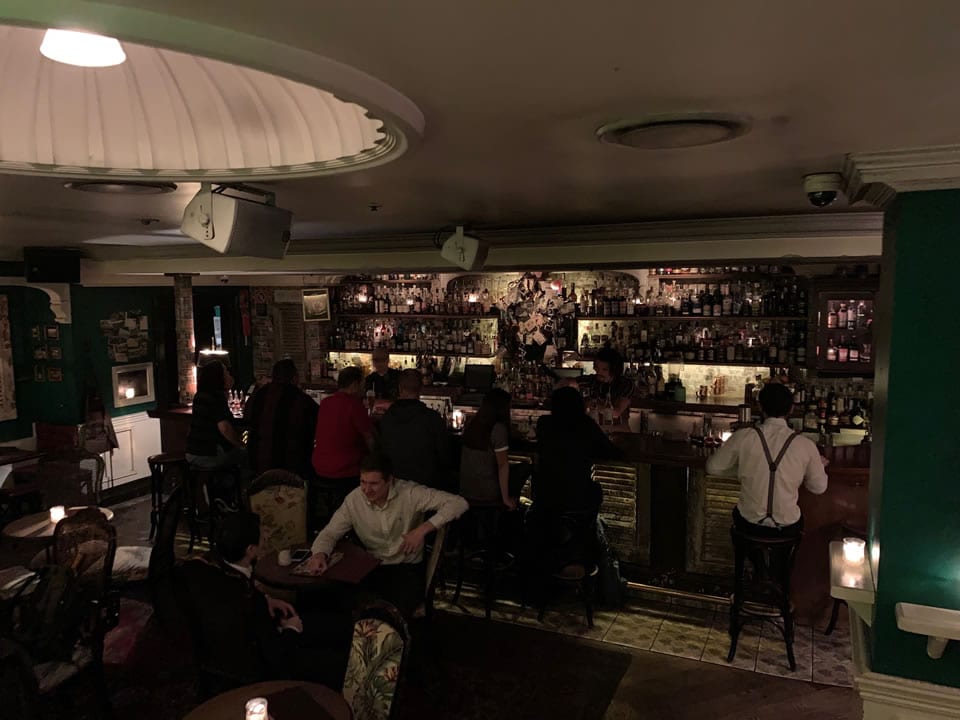 Choose your entrance to The Barber Shop. There is a fancy gallery entry via York St, but on the way, I stumbled upon the back entrance that has a whole lot more character. This entrance lies in a very dark alleyway, signposted with an arrow pointing to The Duke of Clarence pub, off Clarence Street. The alleyway leads to a courtyard with three destinations: the pub, the backdoor of The Barber Shop and The Baxter Inn (see below).

Boasting 700 gins on their list, they didn’t have the first one I asked for and it was an Aussie. They were easily forgiven though, as the range really is amazing. Hippocampus was listed in WA – hello – moved to Melbourne two years ago. They didn’t quite seem to know as much as I would have thought they should. I am told this is the best for gins in Sydney and although absolutely worth the visit, it just seemed like it was resting on its laurels. I took an Elephant Gin G&T and wondered whether I was being too picky, but if you won an award as best gin bar three years in a row – you should be sharp in every way. I think I was just picky. 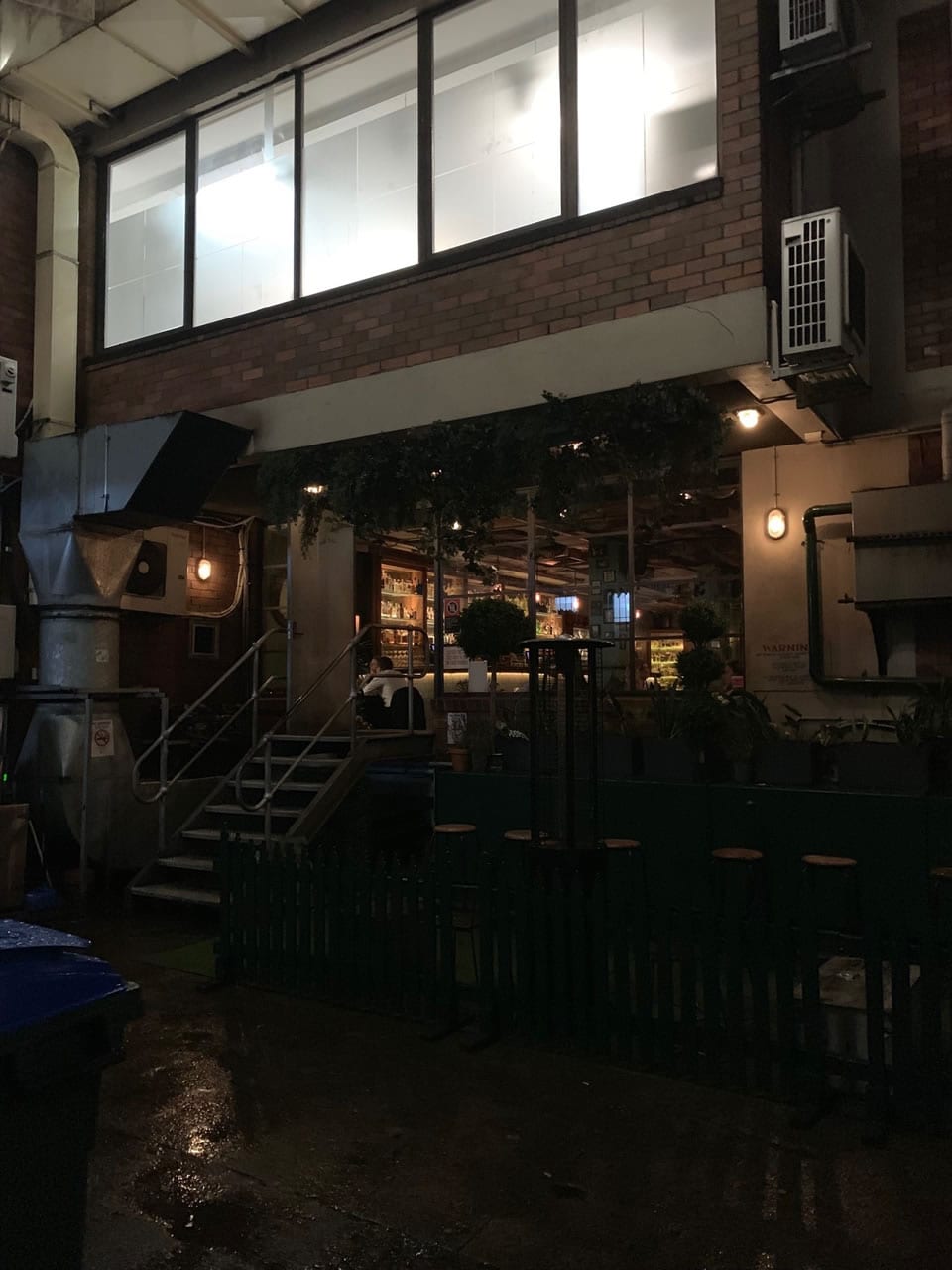 Remember that courtyard, down the dark alleyway off Clarence St? It’s also hiding another bar worth making the visit to. The Baxter Inn is the third bar in the courtyard, in the opposite corner to The Barber Shop. I wandered in and it was great – the atmosphere, lighting, and bottles and bottles and bottles. Nearly all whisky. I had meandered into mezcal, romped into rum, but I wouldn’t wander into whisky right now. A future whisky visit is a must. This one checks the usual “not so easy to spot” requirement. A laneway with a soda bottle. This was an odd place. It’s actually a soda pop factory. Pretty cutting-edge stuff too.

As far as being a bar…firstly, it wasn’t a gin bar and secondly, it was a roller coaster ride…

Down: with only two unisex toilets and both busy – it was a tough wait for me after 4 bars.
Up: I had a great welcome from Mitch
Down: the music was a weird mix of WTF?
Up: Michael got me back on track, explaining the very different and interesting drinks menu.  The Burning Man cocktail was my poison.
Down: a quiet night yet they were slow on the bar
Up: I noticed that the gin they used in the cocktail was the lovely Monkey 47 (not specified in the cocktail description).
Up Higher: odd mixture of garnish with a rosemary smoked fresh pea.
Up, Up and Away: What an amazing concoction!

In the end I am unsure whether I liked PS40 or not…but that Burning Man was on fire. 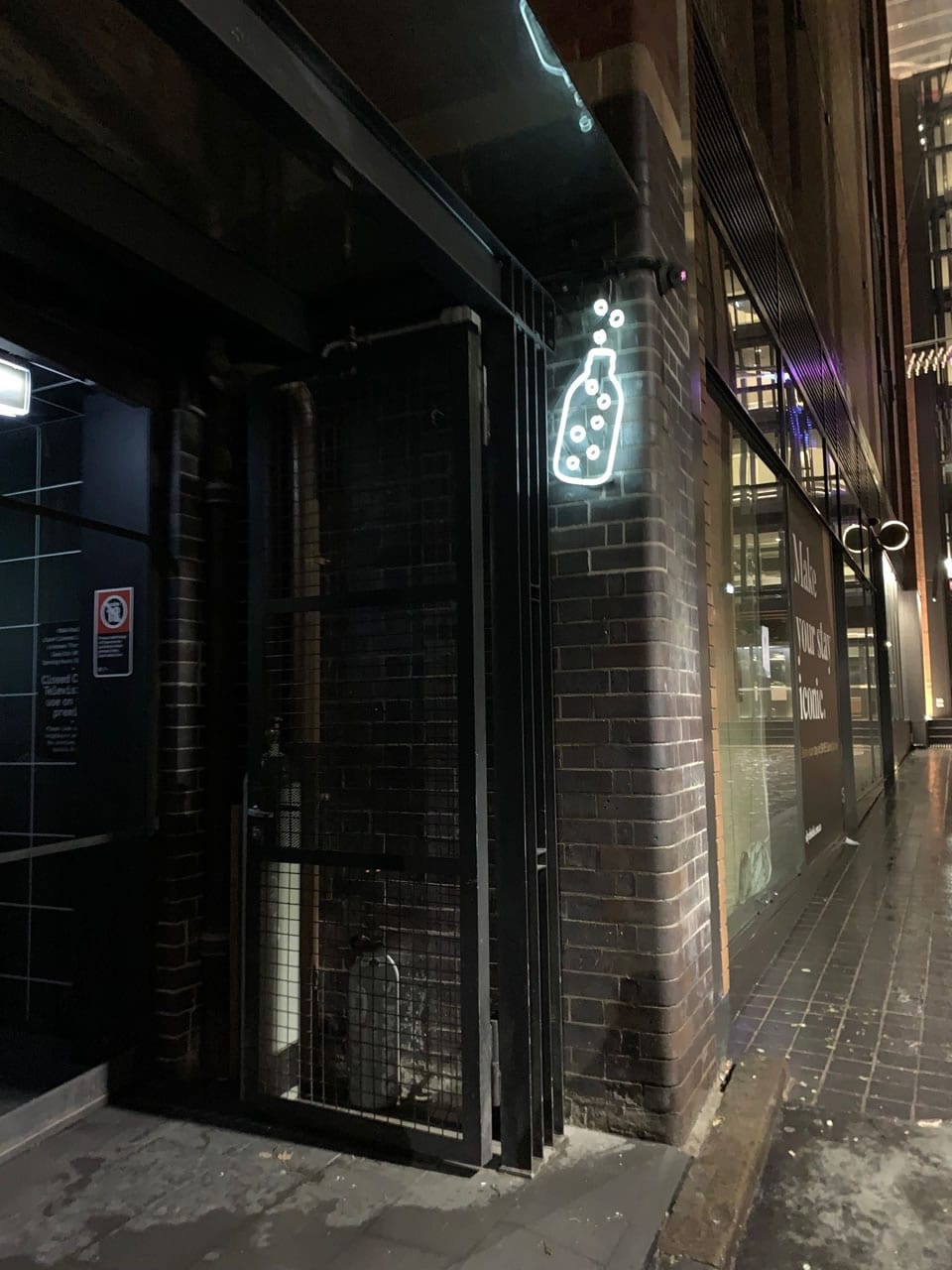 This one is tucked away, next to and under a Subway restaurant, the only indication being a spotlight on the ground. Nice touch! I was immediately transported to a cool place. The spacious bar had minimal décor and an outlook to the footpath above through windows high on the walls, where you could watch the buzz of the outside world with rain and people bustling past. Their speciality were Louisiana cocktails – so I did a Sazerac, cognac bass. 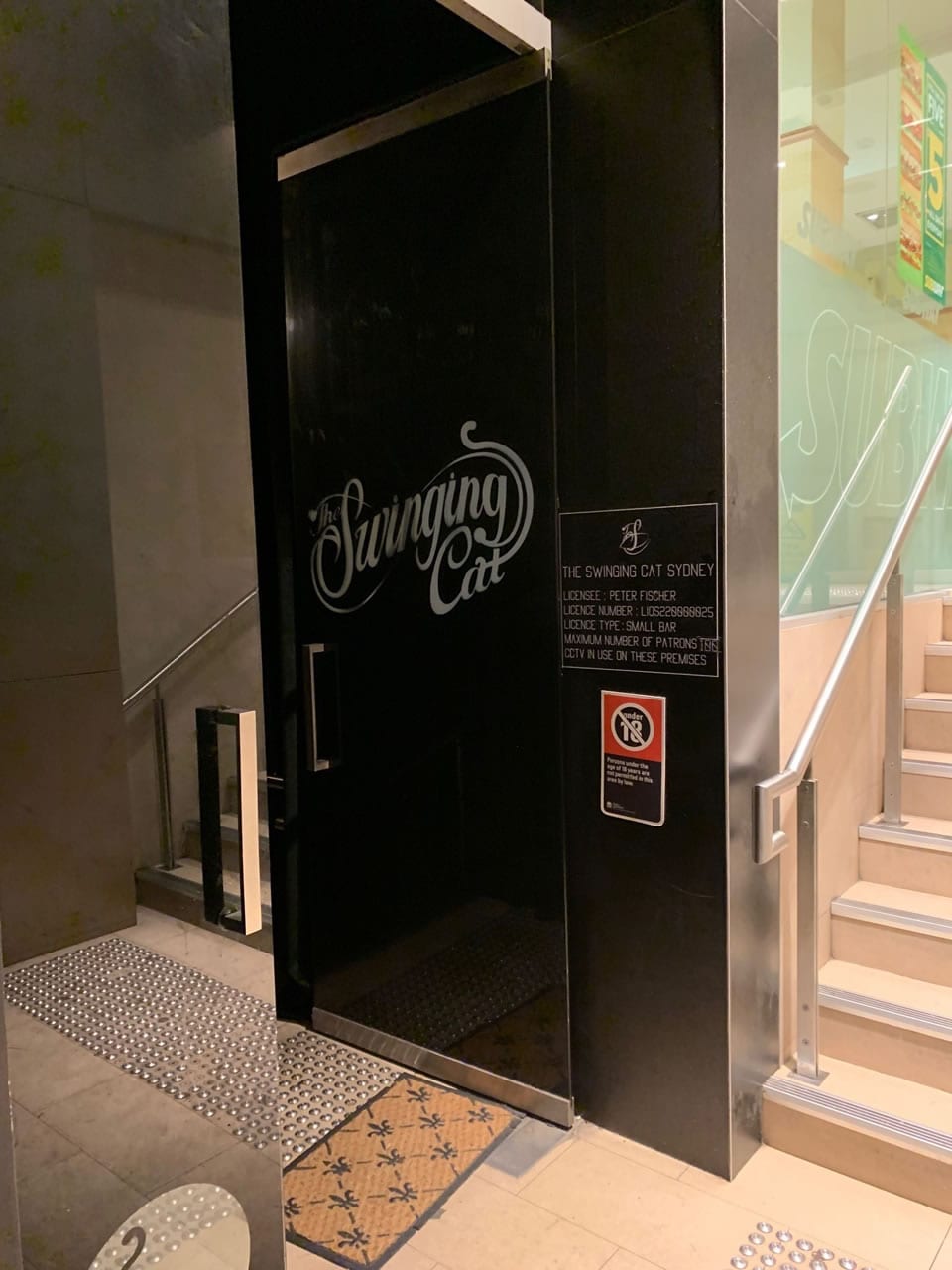 Immediately impressed by absolutely no indication that this place exists. If you have a doubting character and are not good with simple directions, don’t bother. Once you do find it, you’ll notice the decor is impressive, the feel of the place works, the barman uniforms fit in. They know their stuff and they have some decent gin, although not necessarily a gin bar. I decided to finish the night as I started – a gin cocktail. A dry martini with a Never Never Southern Strength.

There were a couple of recommended locations I didn’t have the chance to get to – particularly Moyas Juniper Lounge, but it was a bit of an effort to get to Redfern in the rain. It was amazing to see so many speakeasy bars in such a small area around Clarence Street, perfect given the heavy rain and lack of umbrella. Although it did set a nice mood, so don’t let that stop you next time you’re in the area…

This error message is only visible to WordPress admins

There has been a problem with your Instagram Feed.
Product categories
Recent Posts

Please fill in this form to login!

Please fill in this form to create an account!